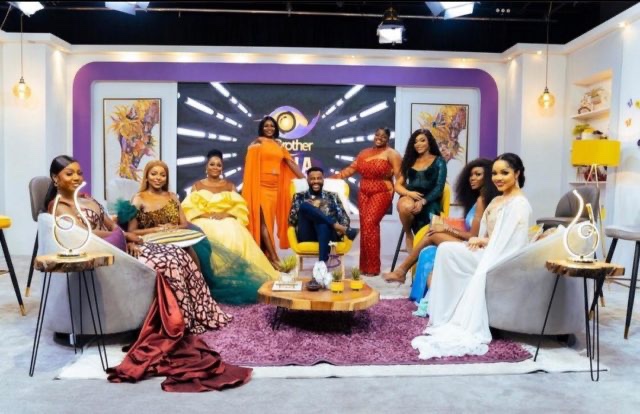 The first day of the Reunion show was all about introduction of the ex-housemates to the house and what they have been doing after leaving the Big Brother Naija show.

Erica and Kaisha were the only housemates missing from the premier of BBNaija Lockdown Reunion show.

Brighto
The first Ex-housemate to be introduced is Brighto. Brighto has been in the entertainment featuring in movies but however, he is taking Certificate examinations so as to become a professional marine engineer which is his long-term dream.

Dorothy
Featuring in the show has thought Dorathy to motivate other women with her kind of physique. She has also been able to expand her logistics company which grew tremendous since leaving the show.

After leaving the show, Eric went after his career dream of becoming a fitness trainer and has been successful with more patronage. No doubt the show has been of immense importance to achieving his dreams

Ka3na
The self-acclaimed boss lady, Ka3na though spending just two weeks in the show, played a major impact in her fashion line. She’s been busy working on her clothing line “Ka3na Empire” since leaving the show.

Laycon
Winning the show was a life-changing experience for the Ogun state-born singer. Laycon has been into a lot of things after the show ranging from launching his show “ I’m Laycon” to releasing his music albums and becoming a special adviser to Ogun state government.

READ ALSO:  Swimming With Bibi Caused My Relationship With Cecelia And I Want Her Back - Ray of Date Rush

Lucy
From cooking in the BBNaija house to launching her cooking brand was a dream she never thought possible. Lucy is enthusiastic and derives satisfaction from the smile on the faces of her customers after tasting her meals.

Lilo
Lilo has learned to do the right things since leaving the show. She has opened her cafe for meals and has featured in movie roles.

Nengi
From becoming the senior special assistant to the Bayelsa State government, she has learned to support the girl child in all ways she can. She has started her shoe company and an excellent acting career.

Neo
He had dreams of becoming a model and an actor. The show gave him the platform to achieving his dreams. He’s now a well-known model with lots of brands asking for his signatory in their products.

Ozo
Football is his life. After the show, he got into his dream of becoming a sports analyst and co-host for football shows. He’s currently the ambassador to Juventus academy in Nigeria. He also has lots of brand deals/endorsements to his name.

Praise
Dancing is beyond just passion for Praise, it is now a business. He has used his dancing skills as a profession since leaving the show.

Prince
Prince has made looking good his business. He is a fashionista and loves to dress well for a living. His skills in hairdressing while in the BBNaija house led him to establish his saloon and beauty parlor.

Tochi
He is a real estate developer. We all need a place to call home. After the show, there is never a dull day as many people are buying homes from him now and remain thankful for the show.

Tolanibaj
The vlogger finds joy in sharing her experiences with friends and foes and has also established her logistics company since leaving the show.

Trikytee
Trikytee focused on developing his photography skills. After the show, he realised he can become an actor and a producer and wish to bring more content to TV screens.

Vee
The show was an incredible platform to the next level for her. After the Show, Vee got focused on constantly writing and recording songs. She also features as a TV host in TV shows.

Wathoni
Since leaving the show, she took to educating people on parenting and has written her book “101 parenting”. She is looking forward to surprising people with her next season.

DSTV and GOTV subscribers will be able to watch the show on the following channels.