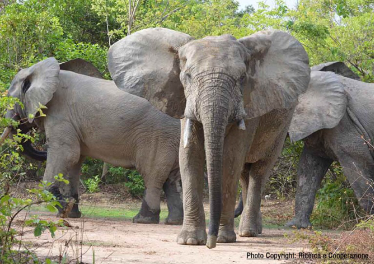 The national park is situated in the West Gonja District which is 24 km from Damongo, the district capital, and 146km south east of Tamale, the Regional capital.

Mole National park is 700km from Accra and 430km from Kumasi. The tourist attraction is 4,577 square kilometres and allows tourists both locals and foreigners have a great experience with wild elephants which can be found near the mole national park hotel.

The national park is blessed with amazing mammals, birds, reptiles and insects.
The Park is located in the Guinea Savanna zone. The dominant vegetation is open savanna woodland with grasses that can reach 3 meters high during the rainy season. There Bovals (open areas dominated by grass) found on areas with shallow soils and iron pans.

Narrow bands of riverine forest grow along most of the streams where birds like to stay in the daytime. Other plant communities, such as swamps and flood-plain grasslands, cover only small areas. 742 plant species occur in Mole of which four are endemic and 24 are rare or have very limited distribution.

In the below paragraph we will look at some of wildlife found at Mole national park, Ghana.

There are also Predators such as the mole national park lions, leopard, spotted hyena, caracal, aardvark, genet, civet and mongoose. Occasionally, buffalo overrun the park headquarters and the lodge area.

Below you will get to know the best time to visit mole national park.

The average annual rainfall is about 1100 mm with more than 90% of the rain falling between April and October, and peaks in July and September.

The dry season lasts from November to March and is characterised by cold dry winds. The mean annual temperature of 28°C varies from 26°C in December to 31°C in March.

It gets very hot in March and April, with temperatures sometimes nearing the 40°s. The cold, dry Harmattan wind which blows between December and February can cause mean temperatures to fall sharply.

Below is the mole national park cost and Payment is always made at the Park Entrance: