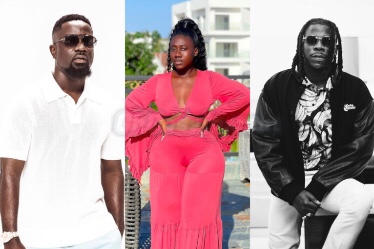 Ghanaian Tik Tok star Hajia Bintu has reacted to the misunderstanding going on between the bhimnation boss Stonebwoy and Sarkodie the Sarknation boss.

According to Tik Tok star Hajia Bintu, the two Ghanaian musicians are not correct but due to the little quarrel they had last year they both have been holding on and refusing to drop some music videos which feature each other.

Recall Sarkodie and Stonebwoy got into a heated misunderstanding last year when the rapper was getting ready for his ‘Black’ album virtual concert held at the Black Star Square (formerly Independence Square), Accra.

It all started when reports surfaced that the ‘Putuu’ hitmaker during an argument over a parking space at the rehearsal of the concert had punched Sarkodie’s manager, Angelo in the face resulting in a brawl.

Rumors had it that Stonebwoy had earlier wanted to park at the VVIP car park of the premises and was prevented by some military personnel but later realized some artists were given the privilege to park there.

This resulted in the Sark Nation boss dropping the Bhim Nation boss from the list of artists who were billed to perform at the event at the last minute prior to the concert and since then, the two artists have been subtly throwing shades at each other with the least opportunity.